Carcinoma of the skin (overview) C44.L

Hello Peter, my proposed amendment does not concern the "Definition" section, but "Synonyms" (which, for technical reasons, cannot be submitted via the amendment proposals at the moment):

Should the synonyms"cutaneous carcinoma" and"carcinoma cutaneous" possibly be added to this article? If so, I would have a few more suggestions to submit via change proposals.

Carcinoma of the skin (classification)

Basal cell carcinoma of the skin

In common medical usage, carcinomas of the skin/mucosa are also named according to their location. Common names are:

The development of malignancies, which begins with the transformation of the cell into a tumour cell, is now understood as a multiphase phenomenon that can last for years or even decades. It is a gradual disturbance of biological equilibrium processes, at the beginning of which the transformation (by chemical, physical, viral etc. influences) of gene sequences (proto-oncogenes) into oncogenes takes place (initiation). In epidermal malignancies, the p53 gene is the best known tumour suppressor gene. 60-75% of squamous cell carcinomas show alterations of the p53 gene. Mutations in the p53 gene are typical UV damage. They cause that UV damage is no longer repaired to a sufficient extent. Oncogenes of the ras family (mutations in the ras gene lead to growth impulses) and bcl-2 (apoptosis inhibitors) are also involved.

The transformation area generally remains without growth tendency at first; only with further exposure to carcinogens or unspecific damage (co- and syncarcinogenesis) does the tissue transform towards preneoplasia (see below precancerosis, AIN, KIN, CIN, PIN), which may persist for a long time as a precursor of the malignant tumour (latency phase) or even regress. Finally, preneoplasia turns into primary neoplasia, the malignant tumour, which sooner or later manifests itself clinically.

Remarkably, there are differences to basal cell carcinoma in the behaviour of the tumour cell assemblies when stained with the antibody BerEp4, which detects the "epithelial cell adesion molecule" EpCAM. Since this antibody is not expressed in squamous cell carcinomas, it represents an important differentiation possibility between the two tumour entities.

Predisposing factors in the development of malignant epithelial tumours:

S.u. carcinoma, spinocellularProliferationof epithelial dressings originating from thesurface epithelium with keratinocytes that are undifferentiated to varying degrees, which infiltrate the different layers of the dermis or subcutis and the underlying structures in the form of fingers or in broad dressings. According to Broders, a distinction is made according to the proportion of atypical cells: In the AJCC classification (2010) the following histological parameters are considered "high-risk" findings:

See under the respective entities.

Operative therapie
This section has been translated automatically.

In the case of invasively growing carcinomas of the skin, a surgical procedure will generally be regarded as the first choice therapy.

In principle, "the bigger the better" applies. This basic principle bears the danger of overtherapy. In this respect, the safety distance of the first excision is individually selected, adapted to the localisation, tumour size and type, growth behaviour - continuous or discontinuous - as well as the age of the patient. This "individualized" procedure requires a high level of competence in histological workup. The complete visualization of the excision margins by means of a three-dimensional examination technique (3D-histology) is superior to any other histological procedure in terms of sensitivity. A surgical procedure secured in this way can reduce the local recurrence rate to below 2%. If necessary and sensible, it allows to work with small safety margins during primary excision and still avoid local recurrences. In the case of an R1 resection, topographical preparation of the excidate and assignment of a tumour excision allows a precise and gentle follow-up operation until the tumour is free.

Each tumor entity and its subtypes has its specific local infiltration patterns. Often they are asymmetrical, not distributed over the entire circumference and thus clinically difficult to assess. This must be taken into account especially in the case of desmoplastic squamous cell carcinoma (high local recurrence rate) or even in the case of very large tumour nodes.

Squamous cell carcinoma is the most common skin tumour capable of metastasis. The global metastasis rate is low at about 4 %. If risk classes are defined by measuring the tumour thickness, a "high-risk class" can be defined from a tumour thickness of 5-6 mm. Here the risk of metastasis is about 16 %. For this risk group, an early diagnosis by means of sentinel lymph node biopsy seems to be useful (see also carcinoma, spinocellular).

Acronym for non-invasive "penile intraepithelial neoplasia" (carcinoma in situ) in the area of the penis (g... 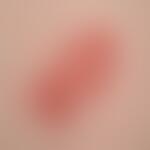