Aptamers (from Latin aptus 'fit' and Greek meros 'area') are artificial, relatively easy to synthesize, short single-stranded, thermostable DNA or RNA oligonucleotides (25-70 bases) that, depending on their three-dimensional structure, bind highly specifically and with high affinity to a specific site of a given molecule, thereby modulating its function (Kumar Kulabhusan P et al. 2020). Aptamers are relatively easy to synthesize, with negligible variation from batch to batch.

Diagnostics
This section has been translated automatically.

Of particular interest for therapeutic use is the regulability of the aptamers. By adding an antidote, an oligonucleotide complementary to parts of the aptamer, the function of the aptamer can be inhibited in a controlled manner. When aptamers are not used as active therapeutic agents themselves, they can also be used to deliver cell-specific therapeutic molecules into cells. Conjugates of a surface receptor-specific aptamer and siRNA.

Lymphomas: Specific aptamers can specifically attach to the surface of immune system B cells. Example: Burkitt's lymphoma.A previously unknown protein complex on the cell surface of Burkitt's lymphoma cells was identified as the target structure of this aptamer (Surface Splicosomal Complex). (Note: Splicing is a process in the cell in which individual sequence segments are removed or reassembled after the readout of a gene on the resulting messenger RNA (mRNA). This allows the protein blueprints in the genes to be used in a modular fashion, for example so that a cell can react quickly to changing environmental conditions such as nutrient supply or temperature). In contrast, this specific aptamer, which recognizes the entire SSC, does not bind to cells of other tumor types such as T-cell lymphomas. As a result of the binding of the aptamer, the cell removes the SSC from its surface to avoid alerting the immune system. This causes several hundred splicing processes to change in the cells, ultimately leading to apoptosis (Fu Z et al. 2020).

Age-related macular degeneration: Pegaptanib , the first and only aptamer to date, was approved in the EU in 2006 for the treatment of age-related macular degeneration (AMD), an eye disease. In AMD, increased release of the protein VEGF-A causes abnormal formation of blood vessels in the eye, leading to photoreceptor death and gradual blindness. By specifically binding to VEGF-A, pegaptanib interferes with this process. However, because more effective AMD therapies have since been developed and approved, the manufacturer withdrew pegaptanib from the market in 2018.

SARS-CoV-2: Nucleic acid aptamers (ssDNA, 2'-F-RNA, clickmers) are able to bind to the spike protein S of SARS-CoV-2 and thereby prevent the interaction of the virus with the ACE2 receptor.

Noroviruses are widespread worldwide and are among the most common causes of non-bacterial acute gastrointe...

Infection with pathogenic amoebae. Within the genus Entamoebia, Entamoeba histolytica is the most important...

Harmless developmental anomaly of the tongue with a circumscribed papilla-free zone in the middle of the ba... 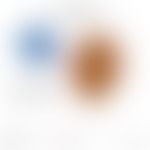