Urtica or wheal is defined as a transient elevation of the skin, with a smooth non-scaling surface. Its extent can range from 0.2-10.0 cm (or larger). The color of urtica varies from white to pale red to bright red, depending on the particular phase of development. Urticae may be surrounded by a red or even white halo. They are caused by dermal edema, resulting in a beet-like, fleeting, and intensely itchy lesion.

An Urtica can (rarely) occur in isolation. Mostly, however, it appears in the context of urticaria as an irregularly disseminated, exanthematic clinical picture. The urtica exists for 6 to 12 (maximum 24) hours, then completely disappears and reappears at another site within the context of urticaria. Urticae can flow together through appositional growth, resulting in large wheal areas. On the other hand, they can develop into ring shapes or polycyclic figures through central regression and simultaneous peripheral expansion.

Urticae can appear in practically any part of the body. However, their localization can be triggered by specific or unspecific frictional stimuli, so that an urtica is formed at the site of the acting stimulus. This pathogenetic principle gives rise to typical distribution patterns which, if well observed, can be diagnostic. The following factors can have a triggering effect:

Urticarial reactions or angioedema due to exposure to cold. Triggered within minutes either by contact with...

Nail ingrown into the paronychium with danger of local painful infection and consecutive formation of exces...

Rare form (about 40 cases described in the literature) of a physical urticaria caused by heat exposure.

Solitary or multiple, located in the middle or deep dermis, harmless, epithelium-lined, variously sized, us... 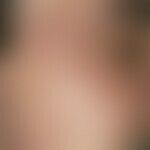